skip to main | skip to sidebar

As you will have gleaned from Twitter recently, my sister Lucy of Northern Spanking fame and I ran an ambitious and completely different play event at the weekend, in a remote Scottish Castle. (which we promptly got snowed into. What else did you expect?) 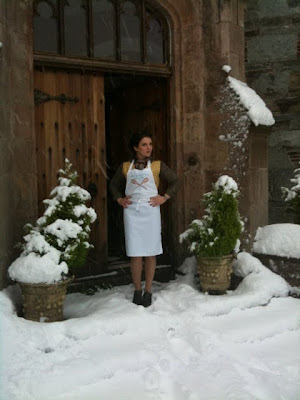 (The actual only picture I have from the weekend: Amelie Hammond-Grant wearing the Darling's Academy apron for supervising afternoon tea, in front of the castle door. Ludicrous that I only got one, but shows how busy and immersed I was - wasn't even taken on my phone - that was courtesy of Sir Rodney Effing's iPhone.)

The idea of a finishing school has always been one of Lucy's big fantasies, and not something seen a lot these days, although in mainstream culture of course, Ladette to Lady has been a popular television phenomenon.

When the first talks of Finishing School (or FS, as we usually referred to it) started on Twitter, I was a bit bogged down with various things at the time and didn't really notice the talks starting between some of the girls and Lucy. When she decided to possibly run a play event and asked who was interested, I didn't pipe up; given how rarely I switch these days, I have no interest in doing things as a bottom unless they really appeal to me on specific levels, and given that Lucy would be topping as Mrs Darling, a character who has been in waiting for some time, that was definitely not something I would be going for.
I also wasn't sure about saying that I'd like to be a teacher, as several girls who had bagsied places if the play went ahead were girls I had never met or even spoken to - always tricky to judge chemistry/levels with that kind of unknown quantity, especially as 80-90% of my domming is with men.
I casually mentioned it to Lucy, who was secretly delighted that I was interested, and I was immediately caught up in the whirlwind of initial planning, which soon led to much detailed research and brainstorming between us.

The idea caught on to the point where Lucy had to decide to try and find a larger venue, as we had more than the maximum 6 girls interested, with a waiting list of 7 or 8. At this stage, the original six girls had already booked their travel to come up to Scotland for the weekend dates that best fit all of us, so it had to be a venue up that way.

Much detailed organisation and planning occurred after this - several long nights of Lucy and I in the office firing off ideas, planning outfits, meals, logos, mottos, rules, etc etc, and getting frighteningly enthusiastic about creating running Twitter accounts for Amelie Hammond-Grant and Mrs Darling , which we casually revealed to key people after a couple of months of Tweeting and monitoring the increasingly excited and mischievous tweets of the girls going. (Tweeting offences and plots were brought up in assembly and dealt with - much to the dismay of the more prolific miscreants, who had thought their 140 characters of mischief two months ago had gone unnoticed.... ;) )

Lucy in her usual army precision arranged every detail down to tiny elements, with spreadsheets and times and drafts of each plan.
This kind of attention to detail is incredible at the best of times, and something Lucy is well-known for in Shoots/Party organisation.
It's therefore rather annoying when people who know this already take advantage of her desire for smooth running and suddenly change plans last minute without actually checking that it won't require huge shifts of pre-existing arrangements - which of course she will somehow make at her own sacrifice, as she's the most splendidly unselfish, generous person I know.

Thankfully all of our 10 girls in the intake appreciated the effort Lucy had made with this, and despite there being, for various serious reasons, very little time to orchestrate the whole event in the end, and despite both of us being sick as dogs and having an average of 3 hours sleep a night in the week prior to the school, it seemed her last-minute request as Lucy to maybe cut Mrs Darling (and I assume, Ms Hammond-Grant by that reasoning!) a bit of slack given the circumstances, was fairly unnecessary.

Granted, there were many rough edges and elements that we'd planned which weren't there - several things got snarled up in the ever-fabulous Royal Mail, some companies sent us wrong orders, things we'd put on the ever-increasing shopping list were sold out when we'd been told they weren't, and there just literally wasn't time for some details we'd been plotting.

Watching one of the several episodes of Ladette to Lady that we consumed for research, we noticed a clip of their morning "assembly" in which the camera opened on the last line of their hymn, which was the final line of "To be a Pilgrim", except with the word "Lady" instead of the Pilgrim.
Lucy asked me if that was a real song, because we "needed it". I had a poke about online, but concluded they had just altered the words a bit. Obviously I offered to write a version for us - after the fun of writing "Shakey Ass" and the accompanying lyrics for the Northern Spanking film about the awful girl band "Hot Fuzz", I wanted to do a bit more comedy song writing.
I wrote the first verse straight away - as I would be trying to bash out some accompaniment on the piano, I didn't want to do a huge amount, and also felt just the one verse would be fine. In the end, seeing as I'd had no time to practise it anyway with everything else going on, I decided to write a second verse two nights before the weekend, in about 5 minutes, whilst happily whacked out on cold meds. I believe this probably shows:

Tune: Monk's Gate by R Vaughan-Williams. Original title: To Be A Pilgrim/He Who Would Valiant Be.

We who would virtuous be
Leave smut behind us
Hereby learn decency
With sore reminders.
To Darling’s we are sent
Our tawdriness repent
It is our one intent
To be a lady.

With our exquisite poise
We’ll draw attention.
Those who cavort with boys
Land in detention.
Our tutors we’ll obey
No matter what they say.
There is no better way
To be a lady

Ah yes. One of the highlights (one of MANY, granted) of the weekend was Mrs Darling informing the girls at the first assembly that they had to learn it by heart for the next day, and then the utter shock that they actually had done. Emma-Jane and Adele have both blogged about the sudden realisation during breakfast preparations and consequent impromptu rehearsal - the sound of which brought a couple of girls running through the castle, thinking they were late for assembly. *grin*

In the next update, the essential - and frankly brilliant, according to the recipients of the verbal version- account of the logistics of getting 10 girls from airport/station to remote lochside castle, in character, having never met half of them and trying to ensure I didn't get arrested for abduction. Hum te tum...
Posted by HelloMissHunter at 21:44

Fabulous, thanks Amy - I look forward to reading the rest from the staff perspective! We had a wonderful weekend (one of my favourite-ever scene weekends) and are so impressed with, and grateful to, you and Lucy for the general amazingness of it all - particularly, as you say, when so many of us were completely or virtually unknown to you. Epic :-)

I remain in awe of the work, energy and lost sleep which went into pulling off one of the most memorable weekends of my life. You helped make it in a big way, and I honestly can't imagine Mrs Darling's without her scarily competent sidekick!

Hope the return to normality is relatively smooth. And I'm delighted to hear that the full Parker story will be going online! That one's a keeper...

I've read several posts written by different participants and they all showed how much time and effort you and Lucy McLean put into that very special event. It must have been an amazing weekend! I'm looking forward to reading more about the events that took place. It's very interesting to read how you experienced the weekend as one of the organizers and a top. Thanks a lot for sharing your adventures! :-)

You were amazing on soooo many levels. Love the Darlings Academy Anthem, I was alone at work today and couldn't stop singing it...until the owner of the eatery next door popped in with a coffee for me and asked why I was singing hymns, perhaps I was a little loud if he could hear me through the walls, don't think he could make out the words but who knows...

Yay, so great to get the perspective from the other side. It just seems unreal to me that both of you would go to so much effort to give us this amazing weekend.

I keep thinking surely they couldn't have enjoyed it as much as we do, really?!!

Miss H-G was a legend and the school anthem just one of the many details that made it fantastic.

Loving all the blog posts on this and that Mrs Darling and Miss H-G are still on Twitter.

I agree with all the others that it's really interesting to see the "staff" perspective on this.
You guys were both absolute stars both during the weekend and with all the organisation before.
Tremendous fun, and Jemima says to tell you that she would quite like to *be* Miss Hammond-Grant when she grows up!

I am astounded by the amount of effort and organisation you guys did to create a kinky role play weekend. Brilliant!

For all queries regarding the blog, the sites I appear on, booking me for modelling, or 121 sessions, please drop me a line (removing the spaces):
amy @ hellomisshunter.com

Sites I appear on in Domme and Sub capacity.